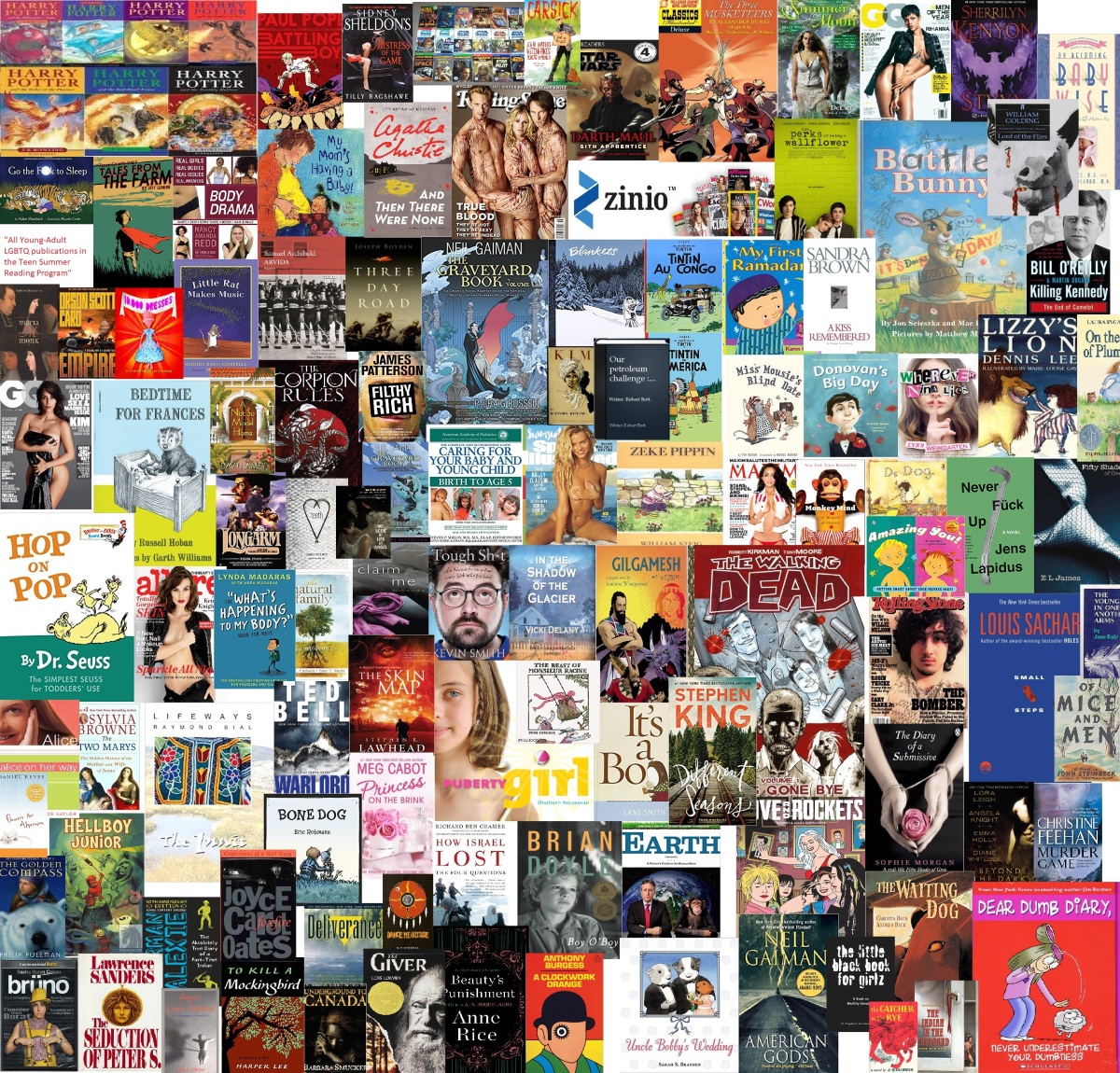 This week in Canada we recognize our intellectual freedom in celebrating the 35th annual Freedom to Read Week (Feb 24-March 2).

Freedom to read can never be taken for granted. Even in Canada, a free country by world standards, books and magazines are banned at the border. Schools and libraries are regularly asked to remove books and magazines from their shelves. Free expression on the Internet is under attack. Few of these stories make headlines, but they affect the right of Canadians to decide for themselves what they choose to read. – freedomtoread.ca

The Freedom to Read Website keeps track of submitted challenges here (I’ll be quoting some passages below). A challenge indicates that someone sought to limit public access to the title, whether in a school, a library, or elsewhere. Sometimes a challenge results in removal of the title – banning a book is a clear form of censorship. Yet, even when a challenge is dismissed, the resulting controversy may mean that it is quietly dropped from school projects, curriculum lists, and displays, which is an unseen form of censorship that is harder to track.

On the other hand, often efforts to censor a book “backfire” because people naturally can’t wait to get their hands on the title that someone doesn’t want them to read!

I’ve been keeping tabs on the challenged titles in Canada the past few years, and I thought it would be fun to highlight a few of my favorite or noted titles that have been challenged and why (if the record contains a reason, which it often does not).

So here, in no particular order, are some notable works which, for some reason or another, someone tried to restrict access to in Canada:

This title was challenged in Edmonton in 2016 and Ontario in 2015. Complaints included that the illustrations were graphic and violent, and a mother said that they made her son cry.

Spooky ABC was challenged in British Columbia. Objections: “The letters D and I poems not very appropriate for kids to read, and quite honestly the whole book was not OK to read to a child of any age. I don’t know if it would be useful to another child. Many other alphabet books [are] available. This one just seemed bad all across the board.”

I don’t know, it looks pretty intriguing to me!

Go the F**k to Sleep by Adam Mansbach

“Offensive language, age inappropriate”- I’m guessing this person didn’t get that this a humour book which is probably more intended for parents than children. There IS an alternate SFW version called Seriously, Just Go to Sleep, but I think it’s missing the magic of the original…

The Waiting Dog by Andrea and Carolyn Beck

The Waiting Dog was challenged both in 2006 and 2010. Complaints included “revolting, vile”. It’s true! This is a picture book with a warning label on the cover art: “WARNING- do you have the guts to read this book?”

The story *spoiler alert* involves a dog who daydreams about pulling the mailman in through the slot and feasting on his body from top to toes. Its graphic imagery and playful verse are both gratuitously, gruesomely, disturbingly macabre, and while it surely isn’t to every readers taste, I’m certain that some kids as well as adults would gobble it up happily.

The dark humour is played in an exaggerated way- the evil thoughts of the dog contrast so completely with the gentle, wiggly, goofy dogs that I know, so as the violence ramps up it only adds to the hilarity.

I probably never would have stumbled across this book if it hadn’t been challenged, but I am quite fond of it. I actually ordered my own copy on Amazon and the author signed it!

It’s alarming to notice a certain trend in the books that have been challenged in Canada in recent years- many of them are LGBTQ+ titles.

In one particular instance in 2016, a mother in Alberta initiated a challenge on all of the LGBTQ book titles that were suggested in the Teen Summer Reading Program pamphlets at St. Albert Library. She found the entire category objectionable, claiming “there is a difference between showing respect for all peoples and using the summer reading program as a place to further LGBTQ propaganda”– she also called LGBTQ+ an unhealthy “lifestyle” contrary to god’s plan and unfit for promotion to youth.

The Teen Librarian did not remove the Queer Lit category from the Summer Reading program, and noted in their response to the patron that it was not a requirement to read from that category to participate in the SRP game. Furthermore, they explained:

“Library patrons have a choice in what they read… The St. Albert Public Library serves all members of the community, regardless of age, race, faith, education level, income, sexual orientation, gender identity, ethnic background, or language spoken. We serve LGBTQ (Lesbian, Gay, Bisexual, Transgender, Questioning) youth, and the library is a safe space for them to visit. Many of these young people, as part of an invisible minority, have learned to be secretive about their sexual identity or gender identity for fear of rejection from their peers or their own families. They experience isolation and are often victims of bullying. For these youth, a realization that there are library materials available to them which address LGBTQ identities and issues can help them choose to become more resilient and to feel that they have a place in society… having LGBTQ material available in the Young Adult collections and on book displays alongside other materials, not hidden away, helps to create an atmosphere of acceptance”.

The Handmaid’s Tale by Margaret Atwood

This bestselling and award-winning dystopian novel was challenged in 2008 by a parent who was concerned about its use in a grade 12 classroom in Toronto. Concerns included “profane language, anti-Christian overtones, violence, and sexual degradation“.

Hmm, I wonder how an author is supposed to portray a dystopia without depicting the plentiful ways in which humanity can go wrong?

The school board reviewed the title and decided to keep it in the grade 11 & 12 curriculum.

Back around the 2000’s the Harry Potter series was widely challenged in the US and Canada, mainly by christian fundamentalists, on the grounds that the series contained themes of witchcraft. The books were removed from classroom use in some instances, and some orders for removal were rescinded after public outcry.

“In 2002 the Niagra (ON) District School Board turned down a parent’s request for the removal of the books from area schools. The parent said the books contained violence and promoted a religion (Wicca) which is against the law in Ontario schools. She said that she had not read the books.”

These books still face challenges again and again- I see another challenge recorded in Canada in 2010, but I imagine there are probably so many more challenges happening without being submitted to Freedom to Read.

Rupert Grint, who plays Ron Weasley in the movie adaptations of the books, recalls a sobering moment in his childhood when he realized the truly enormous impact of the series:


I saw a picture in a newspaper of a book-burning in America’s Bible Belt. And there was a picture of my face smouldering on top of the pyre because they thought the Harry Potter films were endorsing witchcraft.

The first omnibus, containing volumes 1-3 of this manga series, was challenged in Canada in 2017. No details are listed as to why.

I haven’t read Flowers of Evil yet- it’s on my TBR list- but I am a big fan of Oshimi’s beautiful and haunting vampire series, Happiness.

Again, no reason given here as to why it was challenged, but in 2017 someone had an issue with Jumanji. Van Allsburg’s works are unique and whimsical. This strange and imaginative picture book was the inspiration for the film of the same name, which was released back in 1995!

Speaking of 1995, that’s the year that R.L. Stine’s books were challenged in Nova Scotia! Take a nostalgic look at those gorgeous covers, would you?

“A parent group in Halifax asked that both these series be withdrawn from schools in the Halifax School Board’s jurisdiction. The books were said to convey violence and a lack of respect for parental authority.”

Why do parents always seem to want to ban the books that their kids are desperate to read? What a great way to kill a potential love of reading! Also, wouldn’t you fight back if you were being attacked by relentless lawn gnomes or killer slime? And maybe learning to not blindly trust authority is also an important lesson in life, but hey, that’s just my opinion…

I am a 90’s kid myself, and recently wrote on my personal blog about my obsession with Goosebumps. It certainly gave me chills a few times, but sometimes a kid needs a good scare!

And Tango Makes Three was challenged in Canada 2006 and again in 2009. This book was inspired by two real-life male penguins at the Central Park Zoo. The Calgary Catholic School District banned the book from a school library after a parent complained, on religious grounds, about the theme of “homosexual parenting”.

This book has also been highly controversial in the United States, facing frequent challenges.

Again, these are just a handful of examples of titles that have been challenged in Canada, and many more titles are challenged every year that likely aren’t reported.

Please check out the Freedom to Read website and Pen Canada
to learn more about censorship in Canada.

Other excellent resources from around the world include the National Coalition Against Censorship, the Index on Censorship , Banned Books Week and The Comic Book Legal Defense Fund, – because you never know if YOUR favorite book will be the next one to receive a challenge!